Joined Jan 10, 2014
·
5,051 Posts
They are stuck in Japan quarantined on the Diamond Princess. Now 200 of the 2500 passengers are infected (it was only 35 3 days ago). I know President Trump said he knows more than anybody about the Coronavirus and it will be over by Spring. They will probably be gone by then 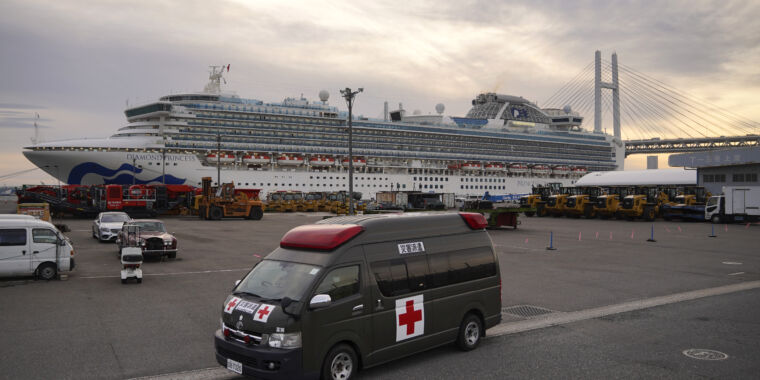 175 now infected with coronavirus on cruise ship, including quarantine officer

Japan is now planning to test everyone aboard.

The other 39 are surviving somehow.

Rivergoer said:
I wish we could solve the flu, lots die every year and not a news item.
Click to expand...

This new virus seems to be the most potent easily transmitted virus since the 1918 Spanish flu.

As much as I feel for those caught up in the quarantines, my opinion is that this is for the greater good.

2014 LT program car, Pull Me Over Red
Joined Mar 31, 2015
·
8,028 Posts
You all need to read "The Great Influenza" by John M. Barry. Sub-titled "The Epic Story of the Deadliest Plaque in History". It is an easy read and extremely informative.

At the height of WWI, history's most lethal influenza virus erupted in an army camp in Kansas, moved east with American troops, then exploded, killing as many as 100 million people worldwide. It killed more people in twenty-four months than AIDS killed in twenty-four years, more in a year than...
www.google.com
► Show Full Signature
"Don't just drive CRUZE!" ༼∵༽ ༼⍨༽ ༼⍢༽ ༼⍤༽
Maqcro1 once said...

Joined Jan 10, 2014
·
5,051 Posts
Update, now 220 aboard the ship are infected and some of the staff as well who are cooking the food and serving them 'exquisite' meals. They are letting some of the passengers over 80 go, Once released will be quarantined in a local Hospital, and it is unknown how long they will be quarantined once on U.S. soil.

Joined Nov 8, 2010
·
535 Posts
It will spread to US soon, in my opinion the real results from China are not published! Communist country has different approach, I know what I'm talking..

Over 1700 medical personnel infected in china.

Joined Jan 10, 2014
·
5,051 Posts
They are letting my ex-friends fly home on a chartered State Department flight where they will spend another 2 weeks at a Military base. Today an additional 67 cases on that ship have tested positive as they are letting these infected people go. Not your Father's Flu, this could be the start of the Plague.
► Show Full Signature
This Forum Blows Chunks

Eddy Cruze said:
Not your Father's Flu, this could be the start of the Plague.
Click to expand...

It is scary indeed. I have three small grandchildren that I am especially worried about.

My grandmother's family was wiped out by the post WW1 flu epidemic. She lost her mother and 3 siblings. She never really got over it. I don't think I would either.

That said, I'm praying for the folks holed up on that ship.

Joined Jan 10, 2014
·
5,051 Posts
Quick update, from the time my friends left the Ship to board the State Department, chartered flights, 27 additional passengers tested positive yet allowed to board the plane for the U.S. Have you ever been on a Plane with 27 disease infested people. I have a really bad feeling about this and the info we've been told so far?
► Show Full Signature
This Forum Blows Chunks

Joined Jan 10, 2014
·
5,051 Posts
Well my friends arrived in the U.S. unwell and the Plane was diverted to another State. Today alone 99 more cases on that ship, and that we knowingly let 27+ Infected people fly in the same plane back home shows our experts are clueless
► Show Full Signature
This Forum Blows Chunks

Joined Jan 10, 2014
·
5,051 Posts
Now we learn against CDC advice the State Department forced the Plane to depart with those 27 Infected Americans. Roughly 50% of those aboard the ship became infected and the Japanese Government handling has also come into question
► Show Full Signature
This Forum Blows Chunks

TDCruze said:
Best hope is for an effective vaccine to be developed quickly.
Click to expand...

Yeah... so it can be mutated in a lab and injected into people so it can further mutate.
Example: guy at work gets a flu shot... 1 week later he's out with the flu. After going to the doctor for the flu. he gets shingles as a result of another vaccine that he wasn't "up to date" on.
Now I'm not vaccinated for either and was around him... yet I'm not sick.
Vaccines are playing with fire... lots of things from the 1800 early 1900 era were fixed with hygiene, antiseptics, and people just being cleaner...

Washington (CNN)President Donald Trump became enraged with senior advisers this week when 14 Americans who tested positive for the coronavirus were brought back to the US from Japan after he had been told they would remain quarantined overseas, administration officials told The Washington Post.
The President was first told that Americans who were aboard the Diamond Princess cruise ship, where the coronavirus has spread, would be flown back to the US on two planes but that patients with the infection or with symptoms would stay in Japan, where the ship is anchored, the newspaper reported.
However, the State Department and a US health official decided to bring back the infected Americans on the planes and place them in isolation without telling the President, the Post said.
Administration officials told the Post that Trump learned of the reversal only after the fact and complained that the decision might damage his administration's handling of the outbreak.


The Post previously reported there had been tensions between the State Department and the US Centers for Disease Control and Prevention regarding the decision to allow asymptomatic Americans who had tested positive for the coronavirus to travel back to the US along with other passengers who had not.
A State Department official told reporters Friday that an execution plan was already underway when Japanese lab results became available.
"I think the folks on the ground did just the right thing, by -- out of an abundance of caution -- moving those 14 people into an isolation area where they pose no threat to themselves or anyone else, to provide room for a robust inter-agency discussion between not just CDC and state, but really the operational elements of HHS," said Dr. William Walters, executive director and managing director for operational medicine at the State Department's Bureau of Medical Services.
"At the end of the day, the State Department had a decision to make, informed by our inter-agency partners, and we went ahead and made that decision," Walters said. "And the decision, I think, was the right one in bringing those people home."
US officials have now confirmed at least 35 cases of the coronavirus in the country, the CDC said Friday.
► Show Full Signature
This Forum Blows Chunks